Cal Poly Has Its Strongest-Ever Showing at Steel Bridge Competition

École de Technologie Supérieure of Montreal placed first and the University of Florida finished third at the competition hosted by Brigham Young University in Provo, Utah, May 27-28.

Cal Poly’s strong showing marked the school’s sixth straight year of placing in the event’s top 10 and its second straight year as runner-up.

“The way we look at it, we’re first in the nation, second in the world,” said Drew Glover, senior captain and welding lead for the team. “In that sense, we’ve come home, for the second year in a row, with the best finish Cal Poly has ever had.”

The competition—which celebrated its 25th anniversary this year—is designed as a comprehensive, real-world student project that includes structural design, fabrication, construction planning and execution, and load testing. It’s an extreme test of teamwork and project management, challenging students to produce a scale-model bridge that satisfies stringent requirements in the categories of stiffness, lightness, construction speed, display, efficiency and economy.

Complete rankings are available at www.nssbc.info. Next year’s national competition will be held May 26-27 at Oregon State University in Corvallis, Ore.

SAN LUIS OBISPO — For the third year running, Cal Poly’s Institute of Transportation Engineers (ITE) club reigns as the best in the west. Cal Poly was awarded the Student Chapter of the Year award at the ITE Western District Annual Meeting held July 10 to 13 in Albuquerque, N.M.

The award was based on student groups’ annual reports, with Cal Poly’s submission ranked first out of 23 reports received from universities in the 13-state region.

“Overall, this year’s report reflected our interest in boosting the profession and not just our chapter,” said Krista Purser (Clayton, Calif.), chapter president. “We coordinated a nationwide teleconference with other campus’ leaders, for example, to discuss how to cultivate leadership, grow and sustain an organization and leverage events.”

The chapter collected seven awards at the event, including:

- The Student Chapter Annual Meeting Award for the highest participation in the regional conference’s competitions, student sessions and student presentations.

- The Student Website Award — a first for the chapter — recognizing the effectiveness of the website’s design and communications. (The site was produced by Baskarapandian, webmaster; Descanzo, photographer; and Mark Howard, social media coordinator.)

The Cal Poly chapter will compete at the international level during ITE’s annual conference Aug. 14-17 in Anaheim, Calif.

The Institute of Transportation Engineers is an international association of nearly 17,000 transportation professionals and more than 140 student chapters.

It was completely designed and is already under construction by students from Cal Poly and their counterparts at California State Polytechnic University in Pomona.

“A New Leaf” features an animated family of chameleons exploring the wonders of a vibrantly colorful world. It will be the only student-built float in the upcoming New Year’s Day classic, which is being held a day later — Monday, Jan. 2, 2017 — because of the parade’s “Never on a Sunday” policy.

“Echoes of Success” is the 2017 parade theme. It is a celebration for those people — family, friends and teachers — institutions and organizations that help in the success of others. It focuses on how character is developed through the selfless contributions of others and celebrates their inspirational gifts.

The Cal Poly Rose Float has been invited to participate in the New Year’s Day parade for 69 consecutive years.

The universities’ Learn By Doing ethos is exemplified in all facets of the program, as students get hands-on experience turning their concepts into creations. The effort brings together students from all disciplines and backgrounds who do the welding, metal shaping, machining, foam carving, woodworking, painting and flower harvesting in a unique experience.

In the process, students compete against professional float builders and over the years have garnered scores of awards while showcasing their work to a vast international television audience. In 2015 and 2016, the Cal Poly entry received the Lathrop K. Leishman Trophy for the most beautiful non-commercial entry.

Construction is in full swing on both campuses and will continue until mid-October, when both halves are united on the Pomona campus. 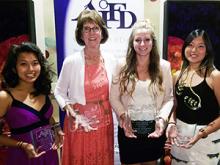